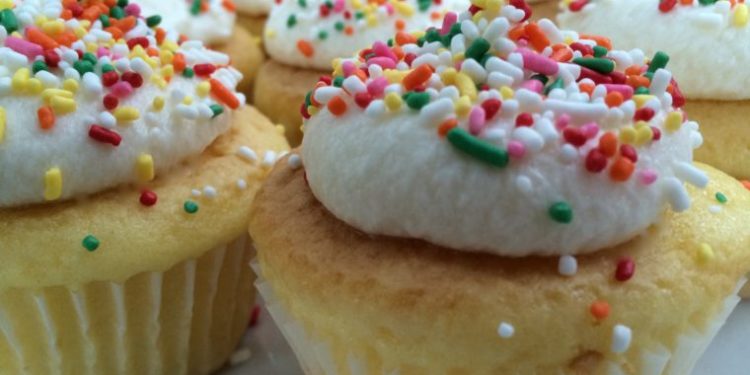 Birthday cakes don’t really have to take a lot of time and effort to look like they did. I’m a big believer that parenting is hard enough without trying to be Martha Stewart. So, when it comes to your child’s birthday party, here are 10 suggestions for easy, creative, memorable birthday cakes.

Sweet sushi – If your child is wanting something more “grown-up” than a traditional cake, something with more of an international flare, sushi-like dessert is the answer. Certain store bought desserts (such as Hostess or Little Debbie) can be cut into small pieces and wrapped with a sliver of a Fruit Roll-Up. Also, Rice Krispies can serve as the “rice” portion of the sushi and can be topped with small pieces of licorice and wrapped with a green Fruit Roll-Up. Another option includes wrapping a large marshmallow with the green Fruit Roll-Up and then topping that with small orange M&M’s (to resemble caviar). Don’t forget chopsticks — a cute party favor for each guest.

Flip-Flop cake – If you’re hosting a swimming pool party, a flip-flop cake matches your theme perfectly. (And depending on the number of guests, you can make a pair of flip flops if one single isn’t enough). It’s as easy as tracing a flip flop onto a sturdy piece of cardboard and using that as your template for your cake. Take a pound cake and cut it in half horizontally. Cut each half into a flip-flop shape. Spread ice cream over one half of the cake. Top with the other half. Freeze the cake for a few hours until firm. Then decorate your cake using licorice twists to make the “v” shape. (You can also use round candies (such as M&M’s or Skittles) to decorate the base of the flip flop).

Castle cake – Whether you’re hosting a Princess party or a Super Mario party, you can change the look of the castle by changing the colors you use. Start with two plain cakes — one larger than the other, so that the smaller one can fit on top of the larger one. A cupcake can even be used to create another level of the castle. Use ice cream cones to create the look of the castle’s turrets. (Place inverted sugar cones onto the regular cones). Frosting can work as an adhesive. Depending on the colors you’re going for, you can decorate your castle with Smarties, M&M’s, and Life Savers.

Pizza cake – If your child’s favorite food is pizza, and your child hasn’t requested more than a pizza party, give him a pizza cake too. Start with a plain round cake. Make it look like the color of pizza dough by combining vanilla, red food coloring, some cocoa powder, and some yellow food coloring. Once you’ve got the “dough,” use warmed red frosting as the pizza sauce. Chocolate-covered raisins work as sausage, green gummy fish work as anchovies, grated white chocolate works as cheese, and hazelnut candies (Ferrero Rocher candies) cut in half work as meatballs.

Dinosaur cake – Make it easier for yourself and use cupcakes. Place cupcakes to create a dinosaur-like shape of your choosing (long or short neck, spikes or not) and then cover the whole thing in frosting. Use small candies for the body (Hershey’s kisses make great body spikes) and chocolate chips (for the eyes).

Butterfly cake – Use a rectangular cake as the butterfly’s body and a round cake cut in half for the butterfly’s wings. Customize the cake with your child’s favorite colors using frosting, small candies, and/or miniature marshmallows. Licorice works as the antennae.

Snake cake –  Cut a bundt cake in half and put the two pieces next to each other to create a slinky “s” shape. Cover the whole thing with green frosting. Use marshmallows as eyes, Hershey’s Kisses for spots on the snake’s body, and a Fruit Roll-Up as a tongue. (Don’t forget to cut the Fruit Roll-Up so that it resembles a snake’s forked tongue.)

Rock Climbing cake – Make two 9-inch cakes. Make or buy vanilla frosting and add a touch of black food coloring until the frosting is gray. Cut the cakes in half. Dab frosting on plate or cake round and place half piece on top. Frost top, then add next two layers, each one slightly smaller on the top. The extra half piece of cake is for the top and to add to the edges if it looks too perfect. Then frost the outside of the cake making it look jagged like rock (see picture above or visit Yvonneinla for full recipe). Add rock candy or jelly beans for the rock and lego or other figures for the climbers.

Teddy Bear cake – For a super cute, super simple bear cake, you need one circular cake and 3 additional cupcakes all covered in brown frosting. 2 of the cupcakes will serve as the bear’s ears, the third cupcake is the bear’s nose. (place it right on top of the cake)  For the bear’s nose, add it to that third cupcake, using either black gel frosting or the hard outside part of an Oreo. You can use red licorice or red frosting for the bear’s mouth. Use two Oreos for the eyes (take off the top cookie part so the white cream part shows). You can also use upside-downHershey’s kisses or miniature chocolate chips as the pupils.

Rocket ship cake – Start with a rectangular cake. Cut off the top two corners so that the shape resembles a rocket, and use those two small pieces down at the bottom as the rocket ship’s wings. Cover in white frosting. Cupcakes can be placed on top to serve as the rocket’s windows. Decorate with patriotic colors (red licorice, red and blue M&M’s). You can even customize the rocket by writing on your astronaut’s name or the date of the mission (aka birthday party).

How to Go from Surviving to Thriving ...