This post is part of a sponsored campaign with ScholarShare 529 College Savings Plan.

September is College Savings Month, which is a great reason for us to talk about ScholarShare, California’s 529 College Savings Plan. It’s also the reason ScholarShare is giving away $1529 to 2 lucky winners in their Facebook contest which has been extended and now ends Wednesday, September 26th. More on that below… 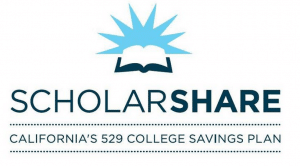 A 529 Savings Plan is a way to save for college in a “tax-efficient manner”. The money you invest is after-tax dollars, and it earns interest tax-free, as long as it it used for “qualifying higher educational expenses,” which actually encompasses quite a few of the many expenses you’ll be encountering when your kids go to college.

Created by parents looking for a tax-deferred way to save for college, the 529 Plans were added to the IRS code in 1996, and there are plans in every state. The Bureau of Labor Statistics Report says that college tuition has risen 439% between 1985 and 2005, and if that’s not enough to get you running for the 529 Plan, I don’t know what is.

So let’s get down to details – how does it work and what are the advantages of having one?

First of all, you can open a 529 Plan for your child and anyone can contribute to it. That’s right, You, Grandma, Uncle Ned, anyone. So instead of another Lego set for little Timmy, you might just ask Aunt Margaret to make a little investment in Timmy’s future.

Opening an account at Scholarshare is now easier than ever, with the minimum initial contribution now down to $25 instead of $50. Plus, the cost of ownership has been lowered, with fees reduced 30% since TIAA-CREF took over management of the fund in June, making Scholarshare one of the lowest-cost 529 Plans in the country.

OK, let’s say little Timmy grows up and decides not to go to college. I know, perish the thought, but let’s just say. Even though your heart may be broken, your money is not lost. The fund can be transfered to another relative, and that relative could be YOU. A friend just announced she’s quitting her job and is going to Nursing school. That qualifies.

Or, let’s imagine a scenario where little Timmy turns out to be a genius or a star athlete and gets a full ride scholarship to the college of his choice. Trust me when I say you have won the Mom Lottery on many, many levels here. Because besides the bragging rights for days, you can withdraw the exact amount little Timmy was given in scholarship money from your 529 – tax-free. Let that sink in a moment.

Sure would make all those hours of homework and driving to practice, not to mention all the saving, worth it, wouldn’t it?

But of course the point here is to save up just in case the scholarship money doesn’t come, or not enough scholarship money comes. Because the last thing we want to do is start our kids off in life with a giant debt.

So check out Scholarshare’s website for tons more information, and click over to the ScholarShare Facebook Page for details on how to enter the contest. All you have to do is share your college savings story. The $1529 can be added to an existing account or can be used to open a new account. Good luck!

{Full disclosure: This post is part of a sponsored campaign, and I do in fact own 2 ScholarShare accounts, one for each of my kids.}

This is super important and great information! I vaguely knew something like this existed. My parents got bonds for my college fund, but I think this is a great way to go and plan to open one for my baby. ^_^ Have to start saving early because those college prices keep going up!