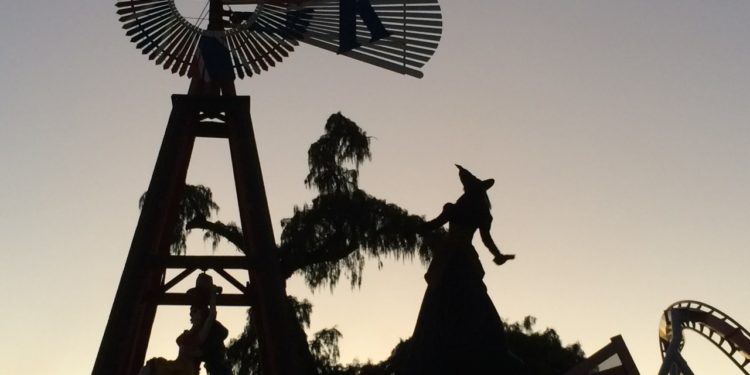 It’s a little known fact that I’m afraid of everything. I put on a brave face when my kids are around and I’ll try just about anything so they don’t see what a chicken I am. But when I was invited to Knott’s Scary Farm I said no. Haunted houses. Zombies. Rides. Absolutely not. But my husband convinced me that it would be fun – we could have date night.

I love date night so I convinced myself what we would experience was not real, just actors and set pieces. It’s Knott’s Berry Farm – where Snoopy lives. Then, right after the sun went down, this woman came up behind me and said “Mija!” and I jumped and screamed.

She kept following us yelling, “Mijita!! Mijita!!” It was like the zombie version of my mother was there. Finally, we ditched her and after three more zombies came up and startled us, we got used to it. Then it stopped being scary and it was just fun.

It helped that we were able to go through one of the Voodoo maze before the park opened to see what it was like before people started jumping out at us. (I watched True Detective and some of the images were scary even in the light of day.)

The other mazes were pretty scary, especially the Tooth Fairy that had images of torture and a kid’s bedroom. I’m so glad we didn’t bring our kids. It was a little too much.

It worked for a date night, though. We were treated to a dinner reception with other journalists and bloggers (and some zombies). It was mostly Mexican food that worked well for my husband who can’t have gluten, but even better was the gluten-free, vegan mac n’ cheese that Carolyn Scott-Hamilton of the Healthy Voyager developed. I even went off of the Whole30 to try it and it was delicious.

After the reception we did what I hope will be a date night tradition – we battled zombies. Infected is a new attraction where you play laser tag while fighting off zombies. It was so much fun. There are two different scenarios, but in each one soldiers take you through the maze and your job is to kill the zombies and get out alive. If you decide to do it, make sure and make a reservation. The lines were long, but it was worth standing in line to do it at least once.

Once we’d succeeded in killing zombies and being terrified in mazes, we went to a show. Elvira Mistress of the Dark is back at Scary Farm this year with a fun and campy show.

Our date night was very successful. And it appeared to be for a lot of people. Being scared is very romantic and there were many young couples making out outside of the mazes. So if you have a date night coming up, you might consider it. There were 10 mazes and four scare zones so a lot of scary fun. Tickets are $39 to $49 depending on the night, or you can buy a season ticket for $65 to $75.

Disclosure: I was given two passes to Scary Farm plus tickets to the reception for review purposes. All opinions are my own.