CarsThings To Do in Los Angeles with Kids

The LA County Fair via The 2019 Chevy Blazer 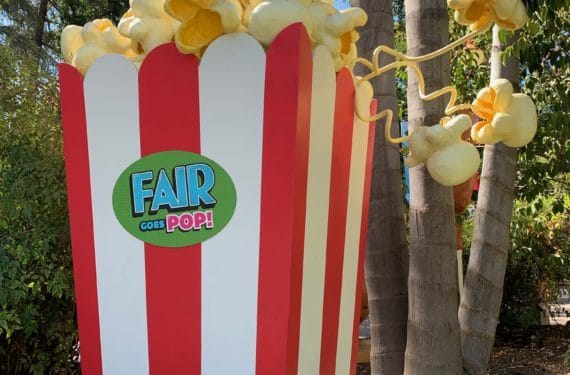 Los Angeles residents don’t often encounter livestock, which is why it’s such a great idea to take your kids to the LA County Fair every once in a while. Chevy wanted to send my family to the Fair this year, so they loaned us a 2019 Chevy Blazer Premier AWD so we could drive out to Fairplex in Pomona in style.

Of course the LA County Fair has more to offer families than just the chance to learn how not to be afraid of sheep and cows. There are carnival games, rides, art shows and themed displays, halls filled with prize-winning jams and jellies, quilts and needlework, and literally tons of food options.

There’s even some food that’s not deep fried.

This year’s LA County Fair theme is “Fair Goes POP”, and they’re interpreting it as a way to celebrate pop culture and LA’s role in it. There’s a very fun display of Southern California iconic landmarks, and multiple opportunities to take selfies.

The art show in the Millard Sheets building is impressive this year, and one of the highlights was this work depicting Frida Kahlo.

The rides are always fun, although maybe not right after eating a giant funnel cake covered in Fruity Pebbles. And the carnival games sometimes result in winning a giant prize like this – although it wasn’t my family’s. We were not as skilled.

County Fair food is not like anywhere else, and every year there’s something new and outrageous to try. And although there are in fact actual, documented cases of healthy food options sold at the Fair, including Vegan tacos made from Jackfruit and actual salads, I’m willing to bet most people go in order to eat something deep fried and served on a stick.

It was carb day, after all, so I was ready for bread and dough and sugar in whatever combinations they wanted to send my way. We sampled the deep-fried pineapple, the Uni-corn, the Rainbow grilled cheese, and the giant brick of curly fries. All just exactly as you’d imagine them to be – and we enjoyed every bite.

Chevy loaned me a 2019 Blazer Premier AWD to drive my family out to the LA County Fair, which meant we got to enjoy the ride.

The Blazer is a mid-sized SUV, and I liked that while the profile was not tall, I still felt like I was riding high enough to see the whole road.

The Blazer is a comfortable ride, as you can probably imagine. Inside it feels like a luxury car, but while you’re driving you can feel the power of the 3.6L V6 engine. It’s got 308 horsepower and Chevy says it can tow up to 4500 pounds.

I’ll take their word for that, since I was not hauling anything larger than my groceries.

The Blazer comes with a 9-speed automatic transmission, and Intelligent stop/start technology, which helps saves gas in City driving. The model I drove is rated a combined 21 MPG.

The Blazer is connected, too. It came with OnStar technology, Navigation, Sirius XM radio, Wifi hotspot, and the Chevy Infotainment system, which includes Apple CarPlay and Android AutoCapable.

The Blazer I was loaned had an exterior color called Graphite Metallic, and the interior was a combination of Jet Black and Maple Sugar. Of course there are many other color combinations to choose from when you’re ready to buy yours.

It was a pleasure to drive and I’m grateful to Chevy for the loan.

Family Fun at the Fair

What’s great about the LA County Fair is that is has something for the whole family. No matter how you travel there, whether in a Chevy Blazer or not, I hope you get a chance to experience the fun, rides, games, art show, themed events, animals, and of course the food.

Sarah Auerswald is the co-Founder of MomsLA.com.