Why I Decided to Raise a Bilingual Child

One cool thing about today’s current social climate is that bilingual education is really celebrated and encouraged. Growing up in Sacramento, I didn’t feel that same love and understanding from peers at my school. In the 80s, most parents were trying to teach their kids only English so they would blend in with society. Even so, I ended up taking Korean in school until I was 18 and immersed myself in bilingual education because I was the bridge between my parents and all English speakers. 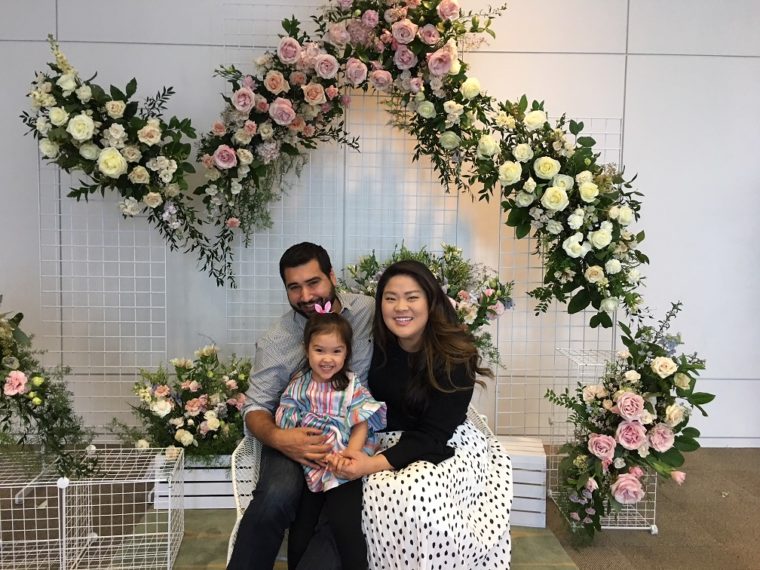 When my daughter, Charlotte (C), was a newborn, I read as many articles/blogs as possible and listened to a few great podcast episodes on how to raise a child in two languages. I had not quite made up my mind if I was going to teach her Korean, but wanted to learn more about it. There were so many different approaches and families doing it, I felt really encouraged to find a method that worked for our family.

Some super fun facts that I learned from my research were:

Our first step to bilingual parenting was to enroll Charlotte in a daycare facility in Koreatown. The daycare only spoke Korean but taught the alphabet, colors, shapes, numbers and nursery rhymes in English. Since Charlotte was a baby, she was fully immersed in both English (at home) and Korean (at school).

I chose to only speak to her in Korean and my husband spoke to her in English. This decision to each use one language was from some of the articles that I read, to help support Charlotte in both languages. Since my husband does not speak Korean, we spoke to each other in English which I think helped C’s English language development in her later toddler years.

For the first 20 months of C’s life, she only spoke Korean (except for numbers, letters, shapes, colors, etc.). It was not my intention to have her only speak one language, but because she was at daycare 10 hours a day and I only spoke Korean at home…her Korean language skills grew stronger organically. My husband (who only speaks English) tried his best to speak and read to C in English, but C naturally picked up more Korean.

About 15 months to 26 months, Charlotte would speak to everyone in Korean and not quite understand why English speakers couldn’t understand or respond to her. On play dates with non-Korean speaking children, this language barrier was pretty tough. I felt awful about this stage in her language development because I could see that her lack of English was putting a barrier between her and my friends’ kids. I was beginning to question myself and how important it was to continue down this bilingual path. I didn’t want to do anything to cause Charlotte to be “different” or “weird” at school. During this phase, I decided to go at C’s pace and have play dates with Korean speaking children to help foster the language and also allow her to play without the language barrier.

When C turned 26 months, my husband and I saw an explosion of English. It was like she was soaking up all the English she was hearing and then all of a sudden began to speak words/sentences!  Remarkable. C was still mainly speaking Korean, but the fact that her English developed so quickly really surprised my husband and me.

Around 30 months, something REALLY clicked in Charlotte’s brain and she seamlessly was able to switch between English and Korean depending on the person she was speaking to. For instance, she would speak to me in Korean and then turn to my husband and repeat the same phrase in English. She would call out for me in Korean and if my husband responded, she would tell him what she wanted in English. I mean…I couldn’t believe it. I was blown away by how easy and automatic it was for Charlotte to use both languages and know when to use it!

For myself, as proficient as I am in Korean, I realized that I had a lot of limitations in the Korean Language when Charlotte hit 26-30 months. I was not able to clearly explain to her why she was in trouble, why we do something, how things go, etc. I had to force myself to go back and learn Korean again!  I really immersed myself in Korean Dramas, bought a bunch of Korean children’s books (4th grade-7th grade), and jumped straight into the language so that I could better support C’s bilingual development.

I learned in a Speech Therapy Course that children must have all around support if they are to learn two languages. That many immigrant children will only speak one language at home and learn one language at school (without really using it), which can cause massive confusion and a lack of language development altogether. With that thought in mind, I didn’t want C to fall into that gap. At home, I read to her in both languages. We speak both languages. And later when she starts to read and write, she will learn both.

I have to say, since I’m the parent that is teaching Charlotte Korean, it’s a LOT to keep up. I’m constantly thinking about her language development and what next steps I need to take in order to properly support both. After seeing how beautifully the languages can click in C’s brain, I’m really encouraged to keep up the effort and make it a priority.

Our family is about 3 years into this bilingual journey and as challenging as it is sometimes, I’ve seen how beautiful and worthwhile it is. If you’re considering this path and aren’t really sure~ I say try it out!  You may start and quit because it doesn’t work for your family, or you may fall in love with it as much as I did. Either way, learning different languages and cultures can only be a positive experience for your little ones right?

How to Raise a Bilingual Child? Systems Make It Simple

A Guide to Raising Bilingual Children

How One Multilingual Parent can pass on Two Languages

Bilingualism: What Happens in the Brain?

I am half Korean and half English (also named Charlotte!) and wish my parents had done something similar. I have always felt somewhat disconnected from my Korean family because of the language barrier, and started learning Korean by myself after my grandparents passed away. My Korean is by no means great, and I definitely have a bit of an accent, but I feel so much more connected to my family and identity. Someday I hope to be fluent.

I'm so glad you found this post and that it resonated with you! Thanks for reading and commenting!

Your story is exciting! My baby is 15 months and I am searching for a Korean daycare only to help supplement her language development. Do you recommend any daycare or preschools? I don’t know how to start searching.

Hello! Where do you live? There are a ton in Koreatown. Two good ones are Young Ye off Wilton and Korean Baptist Church School meat Vermont.

Congratulations!!!! I think your story is wonderful. We have similar stories. Our daughter is learning three languages — french, English and Spanish. She is six and she can speak all three fluently. Mom I not speaks Spanish, father only in french and English somehow she learned it. Like your daughter with the English. Our daughter does go to a French school. I’m in charge of Spanish. So I encourage you to keep going. Your story is fantastic. I learned so much. Take care.