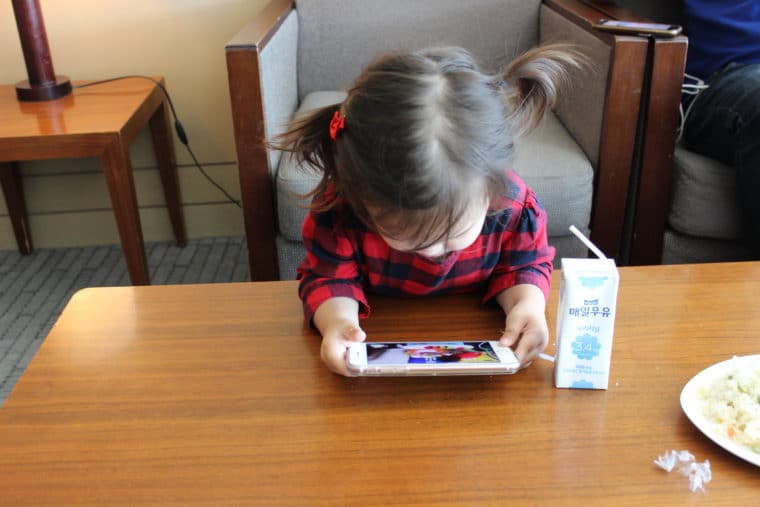 When I was pregnant with Charlotte (C), I thought I wouldn’t show her a screen until she was at LEAST 2, but thought age 4 or 5 was more reasonable. My daughter would read books, play quietly with toys and not even NEED a screen. Fast forward 2.5 years, C is addicted to screens. Sigh. How outrageous that I thought I could keep it from her until 4- or 5-years-old!

Around 15-months, I was at brunch with my friends and having a really hard time with C. She was fidgety and wanted to throw everything off the table or run around the restaurant. One of my friends suggested I show her something on the screen and I realized that I had totally forgotten that was even an OPTION. I played some nursery rhyme videos for her, but at 15-months, her attention span was 5 seconds long.

When she was 18-months, I was flying to Hawaii with her by myself for two weeks, and thought that I should get her used to watching something so that I could breathe a little on the plane. I showed her tons of toddler-friendly shows and nursery rhyme songs so that she could get used to sitting in one place. Even at 18-months, all she wanted to do was run, so screens were just… a tiiiiny distraction.

In Hawaii, I showed her more and more videos while I ran around getting ready or preparing meals. I think this is when the addiction slowly set in. Upon returning from Hawaii, she still was more interested in running around, but because I used it when we were out or when I was desperate for her to sit still at home – I saw myself relying on it more and more and MORE.

C is now 31-months and she could watch a screen or tv ALL DAY. She still plays while watching it, but there are some mornings or evenings when she will have a full meltdown if she doesn’t watch. Or if we’re out with friends (even kids her own age), she will play for a little bit and then ask for the phone. NOT GOOD, RIGHT?

My husband and I saw her addiction to the screen growing so we drastically reduced her watching time so that she only looked at the phone when we were out (and we occasionally let her watch a Disney movie). But man, that addiction to a screen and moving objects is REAL. It is scary how still she will sit when something is on, and it’s scary how much she wants it when it’s not on. But I guess that would be the same as my addition to my phone these days.

I know all the studies that show that screen time is bad for kids. I do see some of the signs in C. However, at the same time, I have seen some really cool developmental perks. C is bilingual and learning Korean and English at the same time. Up until about two months ago, she only spoke and understood Korean. When we introduced Disney movies to her, her English language skills EXPLODED. She was repeating the phrases from the movies and started to understand English more.

C also began to act out some scenes she saw in movies and youtube kids. Her imagination grew so that when we were playing together (without screens), she would be a lot more into “pretend play” than before. On Netflix Kids there is an option to play many cartoons with the Korean language spoken. I choose that to support the Korean that she is learning and also grow my own vocabulary.

We do our best to limit her time, but I am now in the camp that a little screen time does not hurt. C is learning music, letters, English, Korean and pretend play through shows/movies. She takes what she learns and applies them to playdates, interactions with others, and has a better sense of what is going on around her (if that makes sense). She is super observant about the details in the videos and points out what she notices in our life that she saw in the videos. I’m not an expert on screens and I’m not sure what future studies will show, but in our family, I have seen both the pros and cons of letting Charlotte have screen time.

Do you let your little ones watch TV?  Have you had similar or entirely different experiences?

Thanks for your post. I have really struggled debating this very issue. I also said I would not let my daughter watch anything until 2 years old because of the AAP recommendations but I have found myself breaking that rule time and time again; she turns 2 in March. It started with pics of family on the phone, then short videos of us on the phone, and then a little Marsha and the Bear or 2-3 minute Elmo clips on YouTube, and now Mickey Mouse Clubhouse. But I feel horribly guilty - mom guilt is so real. I try not to let her watch every day and never more than 30 minutes but still. She does ask for it and cry to watch it sometimes. However, that has gotten better with me being clear it is only one episode. I don’t want to risk limiting her development, but to be honest she is way ahead of the curve. Her vocabulary is amazing and she just really seems to understand so much more than her peers. My mom friends with kids the same age call her the baby genius. However, I never know what to say to that. Anyway, I don’t really have anything more insightful to share on this issue but understand your feelings.