15 of the Best Doughnut Shops in Los Angeles 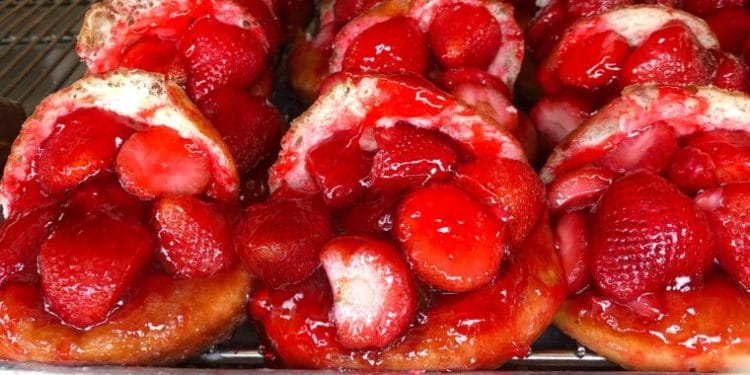 Los Angeles is packed with great places to eat and that is definitely true when it comes to donuts. From dulce de leche donuts to ube doughnuts to gluten free and vegan donuts, you’ll find any type you can imagine at one of the delicious donut shops. Here is our list of 15 of the Best Donut Shops from Randy’s in Inglewood to Trejo’s Donuts in Hollywood to Sidecar Doughnuts in Santa Monica.

Open 24 hours a day, California Donuts has been in business since 1982. Kids (and adults) will love the panda-like donuts and the cereal-topped donuts. Other varieties include the “Matcha Green Tea” donut, the “Simpsons D’ohnut,” and the “Toasted Coconut” donut. Additionally, California Donuts offers “customized donuts” — perfect for a birthday party or other special event. You can choose from letter donuts or work with bakers to design something perfect for your guest of honor (they’ve created football-shaped donuts as well as those that look like sushi).

Blinkie’s Donuts is a popular donut spot in Woodland Hills. All donuts are made by hand on the premises. Their wide selection includes the “Strawberries’n cream” filled donut, the “Apple Fritter,” and the “Bavarian Cream” filled donut. (Their menu also includes croissants, muffins, and breakfast burritos).

The donuts at Sidecar are beautiful and gourmet, made with seasonal flavors and “fried in small batches every hour”. The Santa Monica location is always busy, but the staff is friendly and the line moves along quickly. Flavors include vegan Huckleberry, Snickers and a weekly, gluten-free option.

Stan’s Donuts is the donut shop in Westwood Village. You’ll find more than seventy-five different donut varieties in this small shop. Stan’s Donuts has been in business for forty years because it attracts such a loyal following. Whether you like the traditional (powdered sugar circle donut) or something a bit different (peanut butter and fresh banana with chocolate chips), you’re sure to find something yummy here.

Randy’s Donuts may be just as well known for their donuts as for their large rooftop  donut on top of their shop. Built in 1953, their shop has been featured in many movies and music videos. But it’s not just about the distinctive architecture. You’ll also find a variety of donuts, all hand-made. None of their donuts are more than $2.50 (most are much less). Varieties include the “lemon jelly,” the “chocolate twist,” and the “maple iced.”

Frequent customers of this popular Burbank donut shop speak highly of the easy, plentiful free parking as well as the funny quote on the window — “Don’t get a divorce; get a donut.” In this no-frills shop, you’ll find the popular apple fritters and cinnamon rolls, as well as donuts (jelly, glazed, buttermilk, and more), bagels, and muffins. You’ll also find photos of celebrities who frequent the shop, and if you’re into movie trivia, Donut Prince was featured in the Tom Hanks film Larry Crowne.

Primo’s Donuts has been serving up delicious donuts since 1956! This family-run business has a loyal following of customers. Primo’s has been serving generations of donut-lovers, and there are many varieties to choose from. Cake donuts come in a variety of flavors (cherry, maple, coconut), fancy donuts (jelly, glazed, lemon fills), and specialty donuts (“Bacon Crunch Donuts” and “Skippy” among them).

Once you try SK’s, you may find yourself coming back, again and again. While the shop itself is small with only a few tables, you’ll find a wide variety of donuts tempting you, including the “Maple Bacon Donut,” the “Original Glazed filled with strawberries and whipped cream,” and a “Smore’s Donut.”

Located within the historic Original Farmers Market, Bob’s Coffee and Doughnuts sells more than 1,000 donuts a day, and is just as popular with tourists as it is with locals. Kids will especially like the frosted dinosaur-shaped donuts and seasonal varieties such as valentine hearts and pumpkin-shaped donuts. Other varieties include the “powdered sugar raspberry bismarck,” the “ chocolate frosted,” and the “apple fritter.”

The post popular donut at Donut Friend is the “Strawberrylab.” Among the other varieties are the “Starting Lime,” the Poppygandhi,” and the “Nutellavision.” And if none of these tempt your taste buds, you can select a “d-i-y donut.” Customers select the donut, the filling, and topping to create a customized donut. (Keep in mind that they’re closed on Mondays).

You may have a hard time deciding which donut to try first. Among the many temptations are the “Raspberry Vanilla Bean” filled donut, the “Peanut Butter and Jelly” filled donut, and the “Smores” filled donut. A select variety of gluten-free and vegan donuts are available each day. Repeat customers speak highly of the consistent deliciousness as well as the reasonable prices.

People go to The Donut Hole as much for the donuts as to see the giant donut hole landmark. Kids will love the chance to “drive through a donut.” As you drive through, you can view your options through the glass windows. In business since 1968, you’ll find such varieties as the “Texas Sized Donut,” the “Blueberry Cake” donut, and the “Chocolate Chips” donut on their menu.

Fonuts is the passion of famous pastry chef and owner Waylynn Lucas and baker/owner Nancy Truman. Fonuts are donuts with one important distinction — they are baked and/or steamed rather than fried. For those who are gluten-free and/or can only eat vegan foods, then head to Fonuts. You’ll find a lot of varieties here, including the “Red Velvet,” the “Vanilla Cream Filled,” and the “Blueberry Earl Grey.”

This is the place for “gourmet” donuts. Here, you’ll find varieties such as the “Razzy Lemon Lulu,” the “Oinker,” and the “Pistachio Orange.” They were also the first donut establishment in the country to offer a delivery option (with more information available online). While they don’t have one Donut Shop eatery, you can find their donuts at a variety of establishments (a list is available here.)

MOMSLA IS YOUR SOURCE FOR THINGS TO DO IN LOS ANGELES WITH KIDS.

Disclaimer: MomsLA has made every effort to confirm the information in this article; however, things can often change. Therefore, MomsLA makes no representations or warranties about the accuracy of the information published here. MomsLA strongly urges you to confirm any event details, like date, time, location, and admission, with the third party hosting the event. You assume the sole risk of relying on any of the information in our list. MomsLA is in no way responsible for any injuries or damages you sustain while attending any third party event posted on our website. Please read our Terms of Use which you have agreed to based on your continued use of this website. Some events have paid to be listed on MomsLA.

All The Best Botanical Gardens In and ...