LA’s Top: Best Live Audiences to be a Part of in Los Angeles 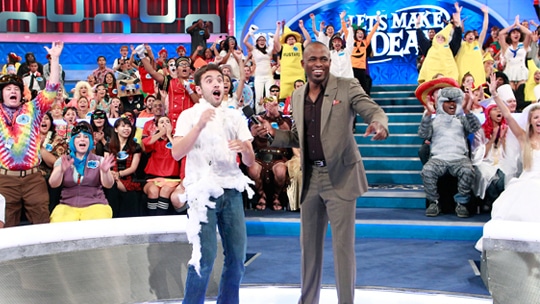 Have you ever wanted to be a part of a live audience? You’re in luck, whether you live here or you’re visiting sunny Los Angeles and you’re looking for something out of the ordinary to be a part of – we’ve created a list the best live audiences to be a part of in Los Angeles. From game shows to daytime talk shows we’ve got your covered! Just don’t forget that popular shows tickets are going to be taken up quickly, so grab them while you can!

Ellen DeGeneres is a great daytime talk show to attend from celebrity interviews, amazing giveaways to comedy only Ellen can provide. You must be 18 years of age to request or book tickets, and everyone must be 14 years of age or older to attend this taping. A limited number of Standby Tickets for the will be made available on the day of the taping, all you have to do is call ahead.

The Price is Right

Come on down! For 44 years The Price is Right has been enertaining daytime audiences with it’s upbeat prize show consisting of contestants picked from the live audience. Grab tickets to be a part of the show and maybe even a chance to play. Minimum age to attend is 18. Tickets are free and chosen by date. If a date says ‘Priority Tickets’ and you receive priority tickets, your admission is guaranteed. If a date says ‘General Ticket’ and you receive a line voucher then admission is first-come, first-served. Having said that, as long as you arrive 30 minutes early you should be admitted.

Now in it’s 12th season, Jimmy Kimmel Live is packed with hilarious comedy bits and a diverse lineup of guests including celebrities, athletes, musicians, comedians and everything in between. Every night, Kimmel delivers his up-to-the minute take on the latest news and pop culture topics from the day’s events in his monologue. Audience members must be 18 year sold to attend. Tapings typically last between an 1 hour to 2 hours (does not include check-in, seating, and the audience warm-up).

If you’d like to flex your brain power even by proxy, attend a Jeopardy taping. During the show you can watch contestants asked general knowledge clues in the form of answers, and must phrase their responses in the form of questions. Audience members must be over the age of 8 years old to attend due to production requirements. Priority tickets are given to those that register via the website above.

If you’ve got a wicked sense of humor, sign up to see Tosh.O Comedy Central’s weekly topical series that delves into all aspects of the Internet, featuring razor sharp humor and biting commentary from comedian Daniel Tosh. From the absolutely absurd to the incredibly ingenious, the series features viral clips, sketches, and “Web Redemptions” which give subjects of infamous viral videos a second chance to redeem themselves from the embarrassment with which they’ve become synonymous. But beware – It’s not for the squeamish! Must be 18 years old to be an audience member.

You can be a part of the action to see America’s favorite game show live. Watch contestants spin the giant wheel and solve the hang-man type puzzles. What fancy dress will Vanna White to the show? Children must be 8 years old or older to attend due to production requirements.

Who’s up for a little fun? Dress up in your craziest costume where all audience members are potential contestants. Hosted by Wayne Brady, Let’s Make A Deal knows that the audience deserves to be entertained! While you wait you can take souvenir photos at the Photo Booth or shop at the souvenir store that will have LMAD t-shirts, mugs and other memorabilia for sale, grab a bite to eat or rent a costume if you forgot yours at home. Don’t forget to play along with “Quickie Deals”and bring random items in your pockets! Wayne may ask for one and if you have it you win CASH!

Although going straight to the show source for tickets is best, the sites listed below provide a wide variety of tickets to some of the best reality, game, talk and sitcom shows filmed in Los Angeles.

1iota
https://www.1iota.com
As one of the nation’s premiere free ticketing services, 1iota offers tickets to exciting, exclusive televised events such as “Jimmy Kimmel Live” and “FABlife”.
Onset Productions
https://onsetproductions.com
Grab tickets to some of your favorite shows like “Teen Mom After Show”, “MTV Girl Code” and “Ace of Cakes”.
Audiences Unlimited
https://www.tvtickets.com
One of the best sources for audience tickets in the LA area, Audiences Unlimited has exclusive access to more than 30 shows filmed in and around Los Angeles including popular sitcoms like “Big Bang Theory”, “Mike & Molly” and “Fuller House”.
On Camera Audiences
https://www.on-camera-audiences.com
This nationwide ticket servicing company features an all-star lineup of LA-based shows such as “Celebrity Family Fued in Hollywood”, “Dancing with the Stars” and “American Idol”.

MomsLA brings you LA’s Top: places, events and things to do. If you have any comments, suggestions or ideas please contact us at: [email protected]

Dating My Husband – Staycation at the ...