Museum GuideThings To Do in Los Angeles with Kids 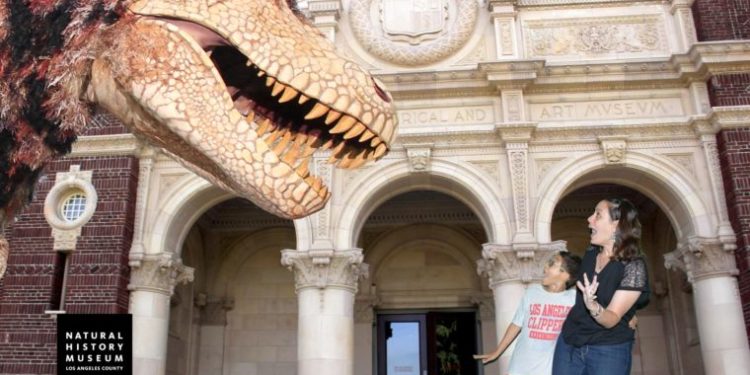 Dinosaurs, butterflies and spiders! The Natural History Museum has so many cool things to see and interact with that families will want to plan multiple visits.

Hours: 9:30 am to 5:00 pm every day of the year, with four exceptions
(The Museum is closed on New Year’s Day, Independence Day, Thanksgiving, and Christmas)

The Natural History Museum is one of those museums that offers something for everyone. Their permanent exhibits include Dinosaur Hall (where you can see a trio of  different aged and different sized T. Rex fossils), the Gem and Mineral Hall (including more than 2,000 specimens of gems and minerals from around the world), the outdoors Nature Gardens, the Animal Habitat Halls (featuring impressive dioramas), and much more. And while many parts of the museum are hands-off, there are also sections that are entirely interactive and very kid-friendly. Be sure to visit the Hall of Birds (featuring interactive exhibits), the Discovery Center (complete with microscopes, touchable fossils and furs, and a polar bear collected in Norway back in 1964), and the Nature Lab (giving kids a hands-on sense of the nature surrounding us on a daily basis).

Throughout the year, the Natural History Museum also hosts special seasonal exhibits and events including the Butterfly Pavilion (now through September 4th), the Critter Club (designed for children 3-5 years of age and included with museum admission, it will resume in September), festivals, workshops, and more.

Extreme Mammals: Odd Features. Unusual Creatures is the current special exhibit and will be at the Natural History Museum until September 10th, 2017. Kids tend to learn a standard definition for mammals — they have fur or hair, give birth to live young, have a backbone, and female mammals feed their young with milk. This exhibit extends that standard definition and serves as a reminder that humans are some pretty cool, extreme mammals too! (Most mammals don’t walk on two legs like we do, and most mammals don’t have brains as large as ours in relation to the size of our body).

As a former teacher, I found this exhibit to be just as interesting to me as it was for my nine-year-old son. My son climbed inside a replica of thick armor (reminiscent of the glyptodont — described as a “walking tank”). We both looked up in awe at the model of the indricotherium, the largest land mammal that’s ever been discovered. (Its weight was comparable to about four adult African elephants, the largest land animal on our planet today). We learned that the blue whale is the planet’s biggest mammal today, with a heart the size of a small car and a tongue weighing about 4 tons!

Extreme Mammals also does a great job of linking the past with the present. We were fascinated to learn about species that have only fairly recently been discovered (such as the striped rabbit discovered in 1999). Extreme Mammals speaks to the commonalities of all creatures on our planet as well as the evolution of animals over millions of years. This exhibit speaks to visitors in a way that reading a chapter in a science textbook can’t. My son and I found it to be not just a cool exhibit but an exhibit that left us feeling appreciative, awestruck, and protective of our planet and all its creatures.

General Museum Admission is $12 for adults, $9 for students, and $5 for children. Special exhibits (such as the Butterfly Pavilion) do require an additional ticket and fee).

The Museum offers free admission to teachers with current identification, active or retired military with identification, and children under 2. Additionally, every Tuesday in September is a free Museum Admission Day. The first Tuesday of each month (except July and August) are also free Admission Days.

Membership options are available which include a number of benefits including unlimited free admission to the Natural History Museum, the La Brea Tar Pits and Museum, and the William S. Hart Museum; free timed-tickets to traveling exhibitions as well as the Butterfly Pavilion, Spider Pavilion, and the Bug Fair; discounts at the Museum stores; member preview days; and more.

Parking: Parking is available adjacent to the Museum for a fee of $12. (Cash only)

Nearby attractions: The Natural History Museum is located within Exposition Park where you’ll also find the California Science Center, the California African American Museum, the Los Angeles Memorial Coliseum, and  the Rose Garden.

Summer of Heroes at California Adventure