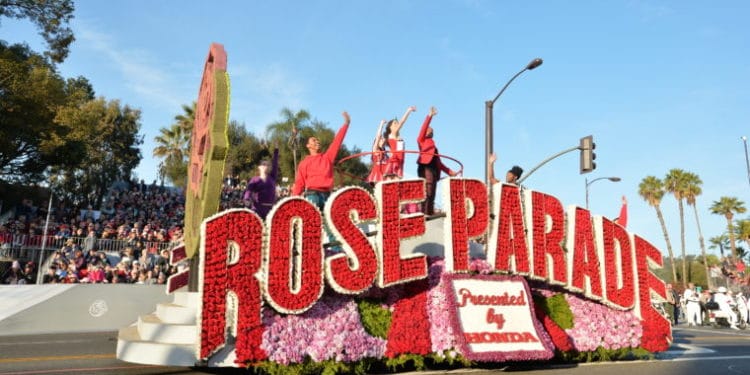 The Rose Bowl parade and football game are annual Southern California New Year’s Day traditions, and they have been for the past 100+ years. It all happens in Pasadena, thanks to the efforts of the Tournament of Roses, and if you’ve never been, but have always wanted to go, here’s all you need to know.

Or, if you’d prefer to stay home and watch it on TV, the Rose Parade begins at 8am PT on Wednesday, January 1st, 2020, and will be broadcast on multiple TV channels here in Los Angeles, including KTLA, which will re-run the broadcast throughout the day.

Is it really called the Rose Bowl Parade?

If you want to get technical about it, the real name is The Rose Parade, and it’s hosted by the Pasadena Tournament of Roses, but in reality most people call it the Rose Bowl Parade, and it always precedes the NCAA College Football classic Rose Bowl Game, which takes place at the appropriately-named Rose Bowl Stadium.

According to the Pasadena Tournament of Roses website, the parade route is 5.5 miles long, and begins on Orange Grove Blvd. After starting out going North on Orange Grove, all the floats, marching bands, and horses take a right on Colorado Blvd. and travel East until they hit Sierra Madre, at which point they turn left. They move at a fairly constant speed of 2.5 miles per hour.

How early do I need to get there to get a seat on the sidewalk?

Viewing the parade from the sidewalk along the route is one of the fantastic Winter traditions we have in Southern California. Rules state that sidewalk spots are first come, first served, and that you can only hold a spot on the sidewalk starting at 12pm on December 31st. And while it may not be snowing here, it still gets cold at night, so if you plan to camp out overnight to get a good spot, then you’ll need to dress warmly.

Yes, many spots along the sidewalk, especially closest to the corner of Orange Grove and Colorado Blvd (or, as we call it: the Norton Simon corner), are super popular and you’ll need to get there the day before to be sure you have a spot for viewing the parade, although you can try arriving at 5am and see what’s available. We’re told by some insiders that if you choose a spot towards the end of the parade route, you can sleep in a bit and arrive closer to 8am.

Is the Rose Parade Family-Friendly?

“Yes, and…” is the answer. It is absolutely Family-Friendly, and can be a super fun day for people of all ages, but it might not be right for your kids – and only you can know that for sure.

We spoke with Leigh Gluck, a member of the Tournament of Roses who’s been volunteering for 20 years, who also happens to be a Mom, and she gave us the Parent Perspective:

“The parade lasts 2 hours, plus remember you have to get there early, so some toddlers and young kids might not be able to sit still that long, and it can be chilly, especially early in the morning.”

Ms. Gluck had a great tip for those of us with kids who want to get a feel for it all, but may not want to try the actual parade: The “Post Parade: A Showcase of Floats.” This takes place after the parade has ended, and continues on January 2nd. It’s a chance to view all the floats up close, without having to fight for a seat or try to keep a fidgety toddler sitting still.

Speaking of Floats, can I help decorate one?

Absolutely. Volunteers need to coordinate with the float builders directly, and there’s a link on the Tournament of Roses website. Each float builder has age requirement info on their website, so you can check wether your kids can be involved as well.

How many floats are in the parade?

Sometimes there are as many as 42 floats in the Rose Parade, which is a lot of flower power! Besides floats, the parade is made up of Marching Bands and Equestrian Units. Last year there were 24 bands and 18 Equestrian Units, so floats still win.

Back to the Parade, how can I get a seat in the bleachers right by the Norton Simon Museum?

Ticketed bleacher seats all along the parade route are available for purchase via Sharp Seating, the official partner of the Tournament of Roses, and may be ordered online. While you’re at it, you may either want to buy a parking spot through them, or plan to take Metro.

Who plays in the Rose Bowl Football Game?

Which one is from which division again?

How do I get tickets to the Rose Bowl Game?

Tickets are available at Ticketmaster, or you can watch the game on TV on ESPN.

Tell the truth: Does the Rose Parade really make people want to move to Southern California?

MomsLA is grateful to the Tournament of Roses nonprofit organization for providing photos and a spokesperson for this article.

The Best Parks In The South Bay