The US Grant Hotel and Balboa Park Family Vacation 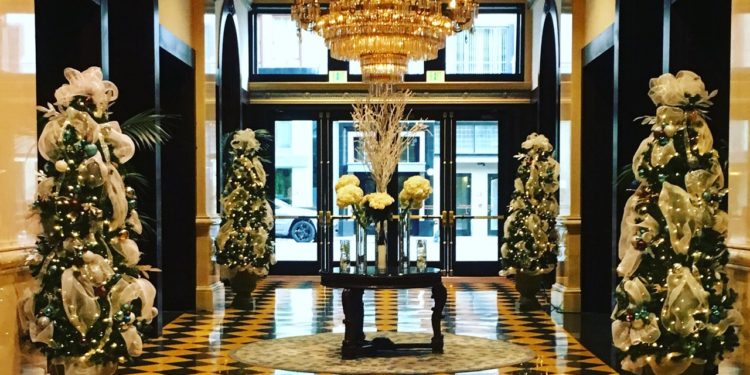 I love staying in beautiful, old hotels that have a history to them. But I also love hotels with a comfortable bed and a good shower. We found all of those things and more at the US Grant Hotel in San Diego’s Gaslamp District.

My family and I were guests at the US Grant for an overnight stay in December and were treated to a suite and tickets to the holiday show, “An American Christmas.” We had a wonderful time at the hotel, not just at the show, but exploring the property.  The hotel was built in 1910 and even though it has undergone renovations over the years, it’s kept its charm.

If you visit the US Grant, you must walk around and look at the displays and read about the hotel. The hotel sits on land originally purchased by Fanny Chaffee Grant, wife of of Ulysses S. Grant, Jr. and daughter of Colorado’s first senator, Jerome B. Chaffee. In 1907, the family buried a time capsule that was discovered in 2005 and on display in the hotel.

There is so much history at the US Grant. During prohibition, the hotel had a popular and not-so-secret speakeasy. Liquor was transported through underground tunnels. What I found fascinating was the sign in the hotel lobby outside of Grant’s Grill that reads “Men Only Until 3 p.m.” The old Grant’s Grill was a place for businessmen to have power lunches where no women were allowed until after 3 p.m. It wasn’t until 1969, after a sit in and threat of a lawsuit, that women were finally allowed to dine alongside men in Grant’s Grill.

After we toured the hotel, we had a snack in Grant’s Grill and then went to the LAMB Theatre’s dinner production of “An American Christmas” in the hotel ballroom. The cast was in character the entire time, even when I took a selfie with one young woman. She looked at my cell phone and gasped, ” How newfangled!” My favorite part of the show was when the cast member (pictured below in the top picture) sang a song in Spanish.

I’m not just recommending the US Grant because of its history and entertainment, it was also very comfortable. We were given a Signature Suite with two queen beds, a living and dining area, and a walk-in shower that was as big as my entire bathroom. The beds were very comfortable. And the shower was so amazing we had to get a picture of all us in it together (fully clothed, of course).

The US Grant is in the Gaslamp District so it’s close to anything you would want to do including running and biking in Balboa Park, shopping in Horton Plaza, and strolling along the water at the Embarcadero. The next day, we took advantage of the hotel’s great location and went to Balboa Park.

The hotel gave us a roll of pennies to throw into the fountains and tickets to the San Diego Natural History Museum.

My boys and I had a great time exploring the museum.

We did so much in the short time we spent at the US Grant and we had a great experience. We would definitely stay there again. I love a bargain and I feel like it’s reasonably priced for a luxury hotel. Rooms range from about $200 a night for a room with two double beds to $251 a night for the Signature Suite like we stayed in (these rates are for the first weekend in February with an automobile club discount. Rates will vary depending on the season and what’s happening in San Diego that weekend). Parking is expensive, but there are packages that include parking.

Disclosure: I was not compensated for this post. However, I was given a one night hotel stay, tickets to the show and tickets to the Natural History Museum plus meals for review purposes. All opinions are my own.

9 Family Friendly Things To Do In ...

Galileo Camps: A Go-Kart Wonderland for My ...